Shooting myself in the "Skuut" 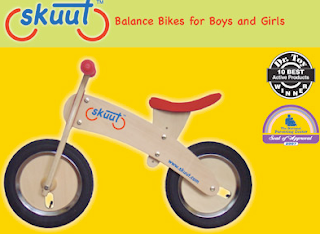 Now I know it’s not going to get my daughter a college scholarship or free tuition for kindergarten. But I have to tell you, I'm pretty fascinated at what the Skutt did for her bike riding skills. After about six months of pedal-less bike riding on the Skuut, she was able to actually ride a two-wheeler without training wheels yesterday. And I think that’s pretty good for a three year old kid. She certainly kicks my ass, I learned to ride a two-wheeler at nine or ten. Just a big over-sized goofball with training wheels on a full-size bike, riding down the sidewalks of East 4th back in the 60’s.

At least no one ever took pictures, that’s blackmail material for sure.

Yeah, so there she is, just one push and she’s off. No falling down, no wobbling, no full body amour. No, just a nice smooth ride without her training wheels, and “I want to go faster” from her little mouth. And of course the only way she knows how to stop the bike is by dragging her feet like she does on the Skuut.

No, she has no clue so far about the brakes.

So there you go, the non-believer that I was, now praising the virtues of the “Skuut”. The funny wooden bike-like thing that I only saw in Park Slope and thought was just another “must-have” for those people that live on slanted streets.

Yes, I was totally wrong about the “Skuut”, it will help your kid learn how to ride a two-wheeler faster. Yes, I was wrong.

Now, if only there were some kindergarten bike riding scholarships, I’d be in luck.

I am sure those blackmail pictures would have been priceless! But so was this great blog about the Skuut. We absolutely loved it! Minus the additional cost of shoe polish, it's great to hear how well she is doing on the big girl bike. :) We would love to feature your daughter on our website, if you have any photos you would like to share with us. Or at least this great blog on our testimonials page. If interested, please contact me. Thank you for sharing this with your friends and the rest of us watching on.

My daughter loves to ride in skuut.It was very useful for her in order to get balance and helped her with two wheeler